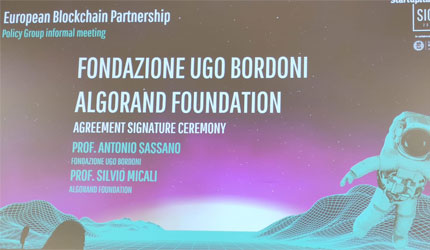 Both parties were present during the meeting of the European Blockchain Partnership Policy Group, which the Ministry of Economic Development hosted as part of the Startupitalia Open Summit at the Bocconi University of Milan, and it was during this time the partnership agreement was signed between the Fondazione Ugo Bordoni, an in-house entity of the MISE, and the Algorand Foundation. The partnership is aimed at testing the ground breaking open-source technology developed by professor Silvio Micali, who has been on the faculty at the Massachusetts Institute of Technology since 1983, is one of the leading international experts in cryptography and computer science,and is the only Italian winner of the Turing Award (the equivalent of the Nobel Peace Prize for computer science).

Under-Secretary of State of Ministry of Economic Development Mirella Liuzzi said, “The signing of the agreement between the FUB and the Algorand Foundation, signed at the Milan meeting of the European Blockchain Partnership of which Italy is co-president, once again confirms the international role assumed by our country on the subject and the attention of the MiSE towards emerging technologies such as the Blockchain also through the promotion of technical-scientific synergies on the subject.” The Ugo Bordoni Foundation has signed the collaboration agreement with the Algorand Foundation as part of its technical and scientific in-depth study on the topic of blockchain technology.

The Ugo Bordoni Foundation’s focus on Algorand is driven by the technical advantages it offers over other available blockchains, advantages that make Algorand particularly interesting as a component to be used in experimenting with innovative applications and services for citizens, businesses and public administrations.

At present, in fact, all blockchain properties are critical in terms of scalability, decentralization and security, three properties considered to be impossible at the same time (the so-called “blockchain trilemma”). Algorand was the first to overcome the “blockchain trilemma” thanks to an innovative system for the creation of consensus (Pure Proof-of-Stake) that allows the constitution of a highly scalable digital transaction register, truly decentralized and secure with respect to the classic blockchain attack scenarios.

Algorand has recently implemented innovative Algorand Smart Contracts in Layer-1 that provide numerous possibilities for governed transactions with simplified scripting templates. This capability, integrated in Algorand at Layer-1, solves a majority of use cases with unprecedented speed, less complexity and significantly lower costs. It is efficient due to lower consumption of computational resources and less subject to programming errors than competing technologies.

By signing the collaboration agreement, the FUB researchers will have the opportunity to collaborate with the Algorand development team to research the technology. FUB will also benefit from the availability of a global Algorand test network (TestNet), as well as the possibility of creating private networks. Finally, FUB will contribute to the Algorand network by running a node.

Prof. Antonio Sassano, President of the Bordoni Foundation stated, “Fondazione Ugo Bordoni is intensely committed to supporting and implementing the activities of 5G, in the investigation of the potential of Artificial Intelligence and in the design and management of digital networks and services for the PA, for citizens and the country. Studies and experiments that have clearly revealed the synergistic role of these new technologies and the need to develop an efficient and secure “distributed trust” infrastructure. To this end, blockchain technology appears to offer the best guarantees in terms of security, integrity and ownership of the data produced by the Internet of Things. Among the various blockchain protocols available, Algorand was the most promising and best met the stringent requirements of security, efficiency, real decentralization and low energy expenditure necessary for future 5G services. Not only that, it also seemed to us that the smart contract functionality was able to increase the “accountability” and the transparency of the algorithms realized on Algorand and therefore guarantee robust solutions that would meet the needs of the PA digital. For this we are happy to have concluded a first scientific collaboration agreement with the Algorand Foundation and it is an honor to have the support of the founder of Algorand, Silvio Micali for this ongoing research and collaboration.”

“Fondazione Ugo Bordoni has a vision for progressive uses of blockchain technology in advancing Italian initiatives,” said Professor Silvio Micali, Turing award winner and founder of Algorand. “I am honored that Fondazione Bordoni has partnered with the Algorand Foundation and selected the Algorand blockchain to serve as the platform of choice due to its technical abilities and overall integrity. I look forward to seeing the outcomes of the blockchain experiments and develops that will soon come from their research team.”