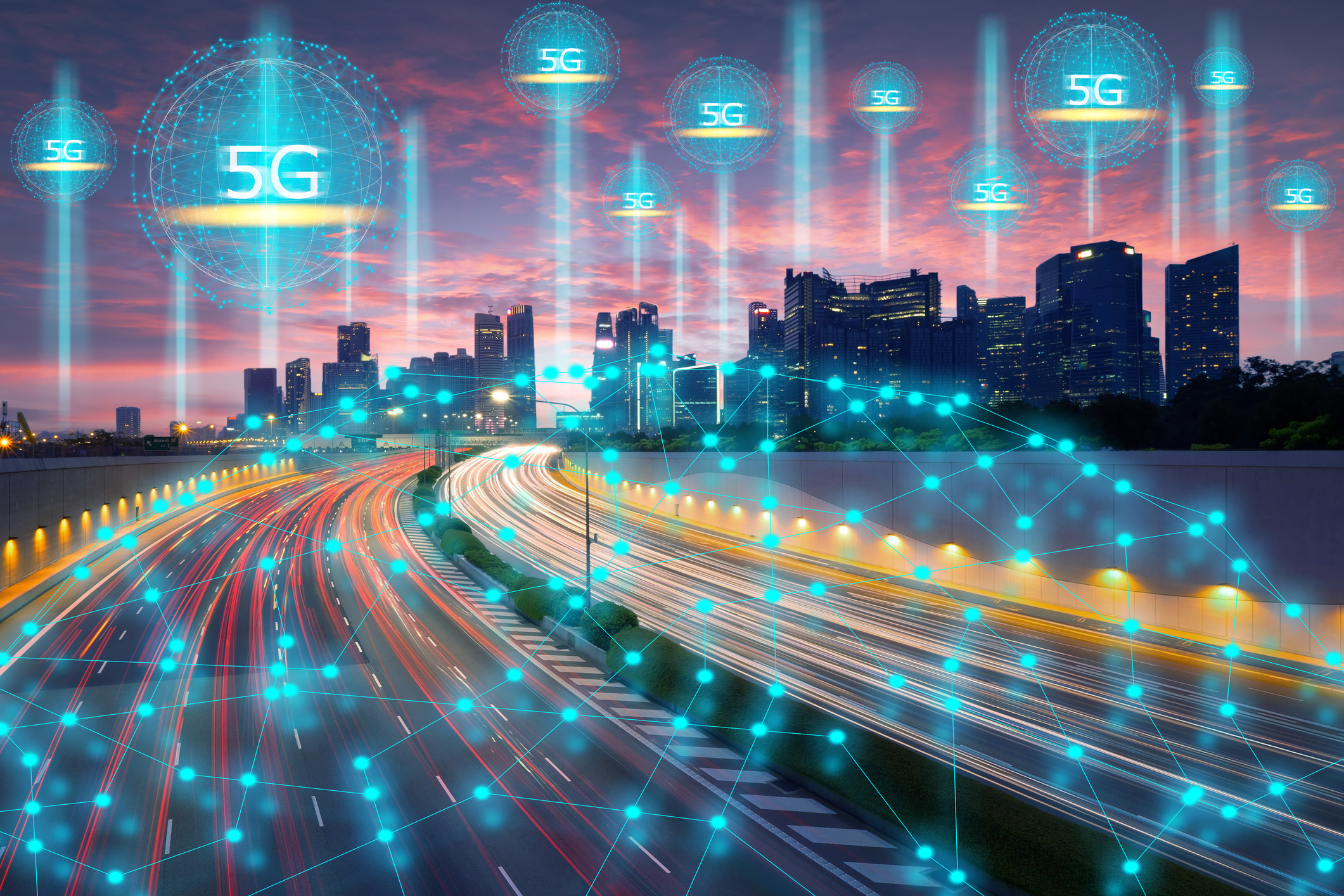 5G is the fifth generation communication standard that will provide far greater performance and speed than the technologies currently deployed. The shared approach to 5G standardisation is based on the evolution of existing communications technologies, such as 4G/LTE, complemented by new fixed and mobile technologies designed to meet requirements not supported by current radio access networks. The 5G paradigm thus makes it possible to address a large number of devices (mMTC – massive type communication) and with latencies in the order of a few milliseconds (URLLC – ultra reliable and Low Latency), overcoming the current limits of individual telecommunications technologies, exploiting their combination and their coexistence.

There are two pillars at the heart of 5G networks: the first is a network that can guarantee the bandwidth and latency requirements of each service, and the second is an efficient network. Efficiency should be understood in the round and concerns the energy consumption of network equipment and devices, the optimisation of traffic paths, the use of specific portions of the network rather than others, the rationalised use of the spectrum for radio access, the distribution of information processing points in strategic points and close to users (whether things or people) that allow for very low latencies and are compatible with critical services, such as automotive or tactile internet.

For 5G, the Next Generation Mobile Networks Alliance identifies usage scenarios that are based on high-performance requirements, including: increased transmission capacity in the order of Gbits per second, the possibility of building ultra-low latency links among millions of objects, enabling the Internet of Things (IoT); increased spectral efficiency; improved radio coverage; enhanced signal efficiency; and optimised transport networks. 5G systems will be able to meet the growing demand in the volume of data transmitted while mobile and to extend the range of classes of applications that can be carried via mobile communications by combining a set of technological innovations. Among them: Heterogeneous networks (HetNet), massive MIMO, ultra dense networks, Software Defined Networks (SDN), Network Function Virtualization (NFV), ultra reliable and massive inter-object communications.

All the services that depend on data and require low latency will not be able to do without 5G, as will data managed and optimised by complex algorithms and those that rely on ad hoc defined communication networks. From a strictly technological point of view, there are different scenarios to manage this new communication paradigm; the evolution of the computational capacity of the nodes in the networks allows the identification of optimal “just in time” routes. Approaches of this type, such as the aforementioned SDNs and NFVs at the core of the network, and C-Rans (Cloud Radio Access Networks) at the edge of the network, allow a centralised controller, with visibility of the entire network and able to make decisions, to allocate spectral and computing resources based on quality and efficiency criteria. 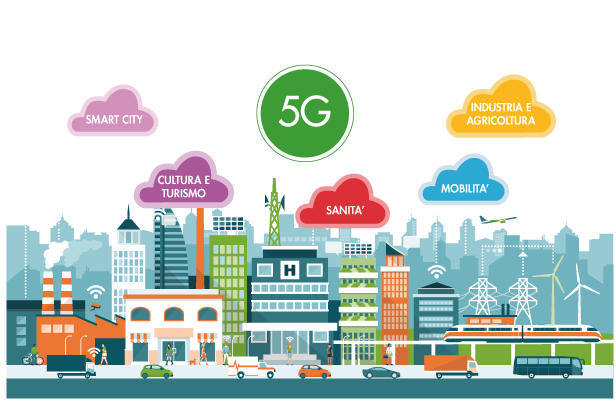 A real revolution compared to what we are used to seeing these days; the networks we know today are actually well separated both in the logical and physical aspects. Prospects open up for an “intelligent” network, manageable via software and transversal (on top) to the individual physical networks. Therefore 5G will consist of many physical network infrastructures, now independent, that, thanks to sophisticated optimisation algorithms, join to form slices of a complex network of networks, managed by software platforms capable of designing their logical structure (“Vertical Slicer”) and ensure their operation and reconfigurability (“Service Orchestrator”).

Unlike its predecessors, fifth-generation technology is a network that goes from physical to virtual and flexible, software-defined, consisting of slices, or portions of the network with specific tasks. In 5G, it is quality of service that determines network elements, where individual network layers are virtual and defined by algorithms, which use and coordinate physical links to optimise the quality of services offered to users. In this context, each service will define its own network: networks composed of transmitters distributed throughout the territory and distributed processing capacity (“edge computing”) to create self-driving or autonomous vehicles; networks composed of a “cloud” of servers (Content Distribution Network) and FTTH (Fiber To The Home) or FWA (Fixed Wireless Access) connections to distribute bandwidth hungry services; networks with high coverage, reliability and redundancy but not necessarily very high bandwidth to connect and manage billions of connected objects, e.g. along the supply chain. Finally, networks with a structure capable of adapting to services that are not yet on the market but that may prove to be of fundamental importance in the future.

So, services that define networks and no longer services that make the best use of the available networks. This is a leap from the network structure currently used. The slicing and orchestration algorithms will be much more complex than current routing algorithms. This is an evolution from “Network Management” to “Dynamic Network Design”. Algorithms will be at the heart of this evolutionary leap and will imply, as happened with the Internet, a radical change in the structure of the ecosystem and the value chain.

A radical transformation of communication networks and of the method in which production and services are structured. So far the network has developed its potential by enabling communication between humans (social networks) while, with the new generation, objects such as motor vehicles, machine tools, energy generation systems, fleets of ships and all of the elements of logistic chains, to name a few, will be able to be coordinated and optimised by sophisticated algorithms that will be based on raw data and information produced on-line (speed and consumption, for example). They will also produce very high quality information data (profiling, driving styles, new rules of production, energy consumption habits, state of infrastructures, etc.).

5G will play a fundamental role in the digitalization process of many economic, social and cultural sectors: from industry to transport, from logistics to agriculture, from energy production and distribution to the protection and enhancement of artistic and cultural heritage, from entertainment to public safety, from tourism to the Public Administration.

The European strategy to develop 5G is currently based on three pillars: 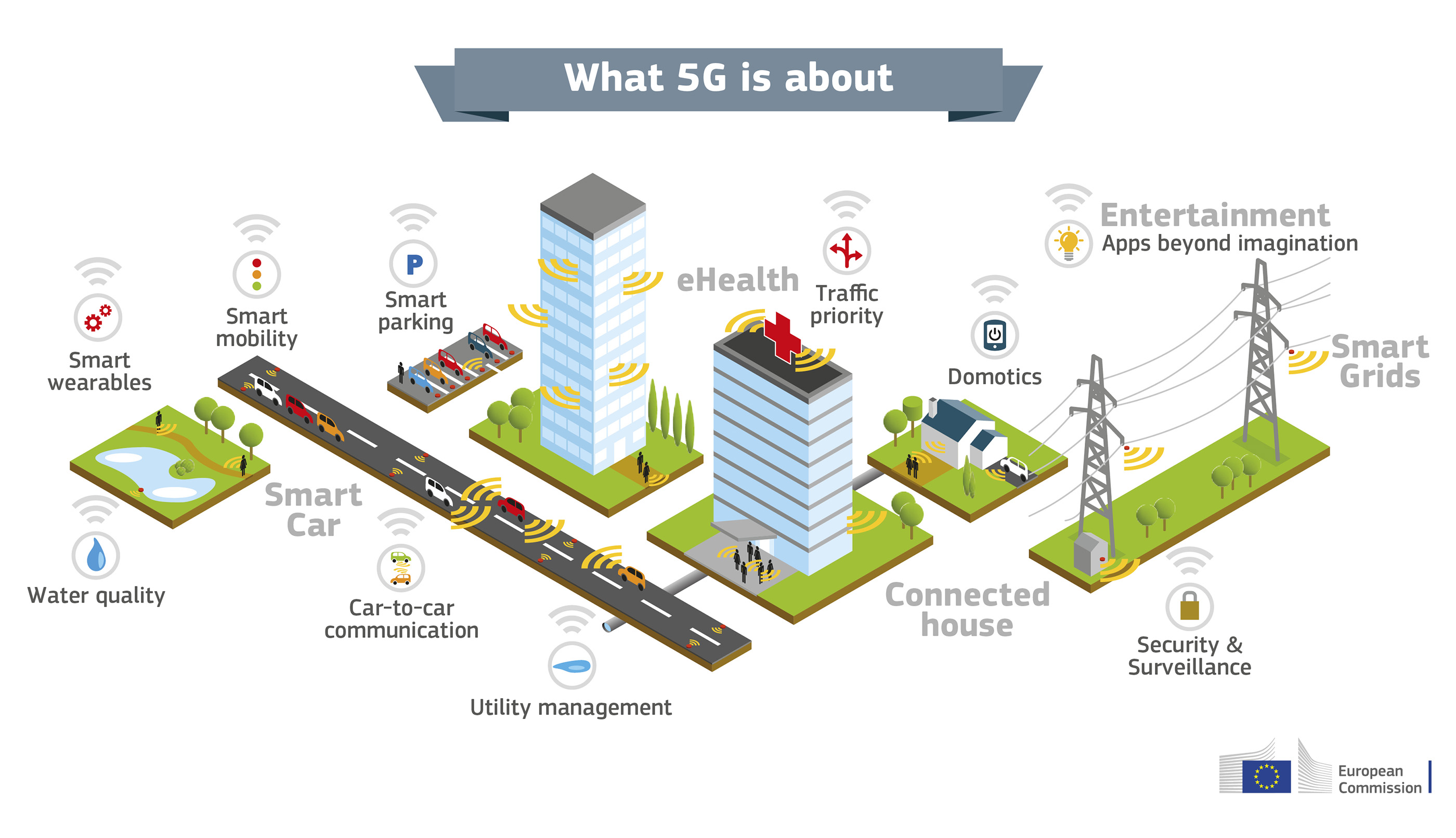 Italy is anticipating the deadlines set by the Commission in the 5G roadmap: in March 2017, the Italian Ministry of Economic Development launched the procedure to allocate frequency resources aimed at implementing 5G experiments in the 3.6-3.8 GHz band (the licenses for 3.4-3.6 GHz frequencies having been extended). The “5 Cities in 5G” contest, which ended in the summer of 2017, saw Vodafone Italia in Milan, Wind Tre and Open Fiber in Prato and L’Aquila, and Telecom Italia-Fastweb-Huawei Technologies in Bari and Matera as winners. In addition to these experiments there are those started in other cities on private initiatives or directed by the Italian Ministry of Economic Development, such as Catania, Cagliari, Genoa, Rome and Turin.

On 2 October 2018, the procedure to allocate rights of use for frequencies intended for fifth-generation networks finally closed. The auction lasted longer than initially planned, continuing for 14 days, with a total of 171 rounds of bids. It accrued around €6.5 billion, much higher than the €2.5 billion set as the minimum amount by the 2018 Budget Law. The tender involved frequencies belonging to three bands: the 694-790 MHz, considered very valuable for its ability to provide better indoor coverage, but releasable only from 1 July 2022 since it is currently held by TV operators; the 3.6-3.8 GHz, deemed to be the most useful for experimentation purposes due to its technical characteristics and because it is available immediately (1 January 2019); the 26.5-27.5 GHz, also available from 2019 and able to offer high performance in terms of transmission capacity.

The strategy for 5G, out of the allocated frequency bands, includes the activity of freeing up the 700MHz band (694-790 MHz) currently used for TV broadcasting services, which must be completed by the first half of 2022 in order to be made available to TLC operators for 5G services.

The Foundation is one of Italy’s leading centers of expertise on 5G. Indeed, the Foundation carries out several activities in connection with the introduction of the fifth generation of mobile connection (5G), strategically launched by the Government and Parliament and implemented by the Ministry of Economic Development. These include the competitive bid for the 700 MHz, 3.6-3.8 GHz and 26.5-27.5 GHz bands, which exceeded the starting price by 130.5%, generating an income for the State of over 6.5 billion euro, and the monitoring of 5G testing activities started in the pilot cities.

In particular, Fondazione Bordoni collaborates with the Italian Ministry of Economic Development through two Conventions implementing the provisions of Law 205/2017. The first includes support activities to the Ministry of Economic Development for the release of the 700 MHz band and reallocation to 5G and the development of 5G networks, services and applications in Italy. The second concerns research and experimentation activities that are useful for 5G deployment purposes.

Support to MISE in 5G study and diffusion activities

The 5G network is a complex "network of networks", which are different and interoperating with…